In the Spring of 2014, the Off the Wall Gallery at Dirty Frank’s put out a call for entries to a curated juried show called “BUT IS IT ART?”   I felt that I had a number of works in my studio that might fit within this category.  I have always collected “found” art, and have recently been making assemblages that utilize ordinary objects: kitchenware, hardware, tools, wire, string, and rope, cigar boxes, and anything else that calls out to me.  The “Pure White Lining” piece was made in 2012 as a part of my short-lived 365  art journal.  The  central fragment of the “SETI” was actually given to  me by a neighbor:  After taking down his old TV antenna, and breaking it up to fit into a garbage bag, Cory walked over to my driveway with the remaining core of the antenna and said “I think you need this.”  It wasn’t until two years later that I mounted the antenna on an appropriate base.  Two years after that, the piece was submitted for this show.  The third piece shown below, “STEAMER,”  is a fragment of several layers of stickers and labels that documented the travels of an antique steamer trunk.  I found the trunk in a resale shop.  The stickers had become loosened, and I liberated the fragment and mounted it on a piece of mat board.  This piece of “found art” is very reminiscent of the early 20th century collages of Kurt Schwitters. 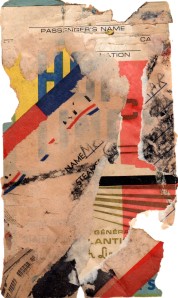